Fast facts on edamame:Here are some key points about edamame. More detail is in the main article. 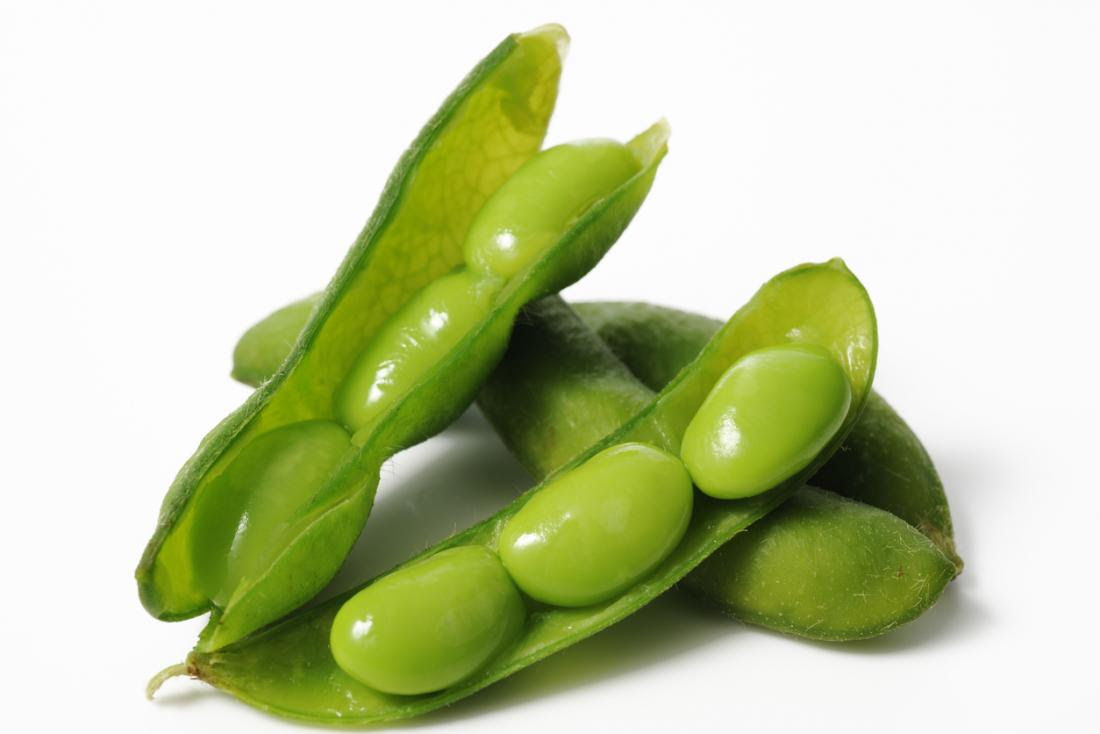 Protein: Edamame is a complete source of dietary protein. Like meat and dairy, it provides all of the essential amino acids needed in the diet that humans cannot make themselves.

Isoflavones: Soy foods contain isoflavones, a type of compound known as phytoestrogens that have been linked to a lower risk for osteoporosis and cancer.

Consuming fruits and vegetables of all kinds has long been associated with a reduced risk of many lifestyle-related health conditions.

There is evidence that consuming more plant foods like edamame decreases the risk of diabetes, heart disease, obesity, and overall mortality. It can also promote a healthy complexion and hair, and it can boost energy.

The calcium and magnesium in soy may help to lessen symptoms of premenstrual syndrome (PMS), regulate blood sugar, and prevent migraine headaches.

Soy-food consumption has been associated with a lower risk of several specific age and lifestyle-related conditions, and with improvements in overall health.

Findings from geographic epidemiological studies show that among populations who consume greater amounts of soy, there is statistically less likelihood of experiencing age-related mental disorders.

Consuming soy protein as an alternative to animal protein leads to lower levels of LDL, or “bad” cholesterol. This, in turn, decreases the risk of atherosclerosis and high-blood pressure.

Genistein, the predominant isoflavone in soy, contains antioxidant properties that inhibit the growth of cancer cells.

Edamame contains folate, which may help relieve depression. It may do this by preventing an excess of homocysteine from forming in the body.

High levels of homocysteine can prevent blood and other nutrients from reaching the brain, and they can interfere with the production of the feel-good hormones serotonin, dopamine, and norepinephrine. These hormones regulate mood, sleep, and appetite.

People with type 2 diabetes often experience kidney disease, which causes the body to excrete an excessive amount of protein in the urine.

In addition, folic acid intake is essential during pregnancy to protect against neural tube defects in infants. One 155-gram cup of edamame provides 482 mcg DFE of folate.

The recommended intake of folate is 400 mcg DFE for men and women aged 19 years and above, 600 mcg DFE during pregnancy, and 500 mcg DFE while breastfeeding.

A lack of iron in the diet can affect how efficiently the body uses energy. Edamame is a good non-heme source of iron, along with lentils, spinach, and dried fruit.

Edamame contains choline, a nutrient that is similar to the B vitamins. It contributes to healthful sleep, muscle movement, learning, and memory.

Choline also helps maintain the structure of cellular membranes, aids in the transmission of nerve impulses, assists in the absorption of fat, and reduces chronic inflammation.

Soy isoflavones are known to decrease bone loss and increase bone mineral density during menopause.They have also been reported to reduce other menopausal symptoms.

Edamame is available in grocery stores, fresh in the pod, shelled, or frozen. When buying frozen edamame, make sure there are no additives in the ingredients, only edamame.

Edamame has a mild, buttery flavor that pairs well with many dishes.

You can eat it:

Recipes from a dietitian

The following delicious and healthy recipes were prepared by a registered dietitian:

Some past studies have linked excessive soy consumption with a higher risk of a particular kind of breast cancer, but human trials have not produced enough evidence to support this, and the results have been questioned.

More recent studies have shown that moderate amounts of soy foods appear to decrease the likelihood of breast cancer recurring.

Worldwide, a growing number of people are experiencing allergies and food intolerance. Soy is a common allergen in infants and children and often triggers symptoms in those with eosinophilic esophagitis (EoE), an allergic inflammatory disease of the esophagus.

It is the total diet or overall eating pattern that is most important for disease prevention and achieving good health. It is better to aim for a diet with a variety of healthful ingredients than to rely on individual foods as the key to good health.